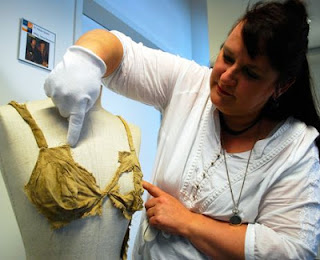 Underwear dating from medieval times that was found under flooring of an Austrian castle is hardly racy by the standards of today.

But the discovery does suggest that women in 15th-century Europe took pride in their appearance, and perhaps not just the privileged classes.

The University of Innsbruck announced this summer that "the world's oldest brassieres" had been found at Longberg Castle in Tyrol, western Austria.

The cotton garments were decorated, much like today, with lace and embroidery. It might not be a stretch to suggest that such underwear was designed for those "special occasions," scholars say.

At the heart of Tyrol, an area lined with precipitous alpine peaks, is the city of Innsbruck. The items were found during renovations of the castle in summer 2008. The castle lies to the south of the city.

Four brassieres were found amid a heap of cotton material, clothing and leather footwear under the third floor.

Carbon dating by the university's archaeological research team dated the garments to between 1440 and 1485, making them the oldest in existence.

Click here to read this article from The Asahi Shimbun

See also Medieval lingerie? Discovery in Austria reveals what really was worn under those tunics