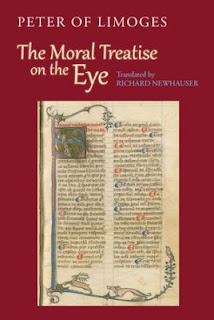 Imagine a stick partially submerged in a pool of water. It appears to be broken at the point where water meets air, but in fact it is in one piece. This optical illusion is called refraction: as light passes from one medium to another, it bends and changes speed based on each medium’s refractive index, causing the stick in water to appear bent.

Most people are familiar with the scientific definition of refraction. But have you ever considered it as a moral concept? Say there’s a man on the street digging through a dumpster. You might see him as being “broken.” But as refraction teaches us, things are not always as they appear.

The idea that scientific principles might also have philosophical applications is explored in The Moral Treatise on the Eye, a text written in the late 13th century by Peter of Limoges. The Moral Treatise is a compilation of short narratives, or exempla, meant to help preachers deliver sermons. Each chapter offers a piece of knowledge about the field of optics. Peter of Limoges first explains the concept scientifically, and then gives a moral or religious interpretation, like in the refraction example.

“Peter quotes Paul, saying that we see things in this world through a dark veil, but in the next life, you’ll see things as they really are,” says Richard Newhauser, an English professor in the College of Liberal Arts and Sciences at ASU. “In effect, what he’s saying is, in heaven there’s no reflection or refraction but only lines of direct sight.”

The Moral Treatise on the Eye combines scientific thought with concepts of moral theology. This blending of disciplines is part of what appealed to Newhauser, who recently published a translation of the text with extensive explanatory footnotes.

Click here to read this article from Arizona State University