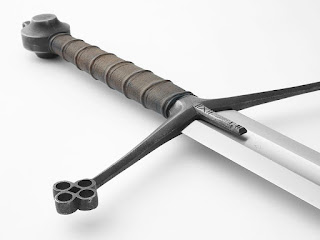 I grew up on an early edition of Dungeons & Dragons and John Boorman’s Excalibur. The image of the tin-can knight — clanking and rattling as he walked, hoisted onto his horse by a crane — was the first part of my childhood that had to go when I started working on The Mongoliad, an epic collaborative tale about the Mongol invasion of Europe in the early 13th century.


Part of our purview on the project, an interactive story that’s being turned into a book trilogy, was to portray Western martial arts correctly. Thus began my crash course in the evolution of arms and armor over several centuries of medieval life.

One of the most fascinating aspects of this education was charting the changes that occurred as a result of this medieval arms race. Let’s start with the Battle of Hastings, in 1066, as recorded by the Bayeaux Tapestry, which is more than 200 linear feet of embroidered pictures of men in armor.

They’re wearing hauberks, long shirts that hang nearly to their knees made from interlinked iron rings. They called it “maille,” plain and simple, and if the troubadours were getting all poetic about these battles, they might refer to this maille as a “net.” Never “chain.” Why? Well, because it was a net.

Click here to read this article from Wired Magazine