Looking for Leonardo, With Camera in Hand

For decades scholars have labored to find a lost masterpiece by Leonardo da Vinci, believed by many to be hidden behind a fresco by Giorgio Vasari in the Palazzo Vecchio here. Now — thanks to an unusual marriage of art history and nuclear physics, partly arranged by an unassuming freelance photographer — the quest may soon be over.

Better yet, it may end with a photographic image of the lost mural. 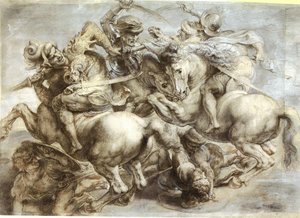 The complex tale begins in the 1970s, when the Florentine art historian Maurizio Seracini became convinced that the mural, “The Battle of Anghiari,” hailed by some in Leonardo’s era as his finest work, was lurking behind the wall-sized Vasari in the Hall of Five Hundred, for centuries the seat of Florence’s government.

With its violent, bucking horses and bloodthirsty soldiers brandishing swords in the scrum of warfare, “The Battle of Anghiari,” which Leonardo began in 1505 and appears to have abandoned the following year, was hailed as a triumph and copied by many artists until it mysteriously disappeared sometime in the mid-16th century. (A well-known Rubens drawing in the Louvre was inspired by an anonymous copy of the wall-size battle scene.)