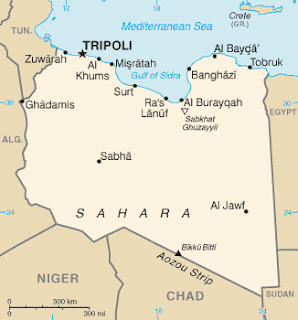 Archaeologists in contact with colleagues in Libya say that their nation's antiquities appear safe despite the chaos in the country. That news is contrary to reports earlier this week, which claimed that Libya's museums were being plundered and sites destroyed in NATO bombing raids. Libya boasts a host of ancient Phoenician and Roman sites, as well as major collections of ancient artifacts in Tripoli's Jamahiriya Museum and other smaller museums around the country. So the claims of damage prompted fears of a replay of Baghdad in 2003, when the famous Iraq Museum was looted. But Western archaeologists and Libyan sources say that there is no evidence that such destruction is taking place.

"The antiquities in the major sites are unscathed," says Hafed Walda, an archaeologist at King's College London, who has been in frequent contact with his Libyan colleagues during the recent arrival of rebels in the capital city last week. "But a few sites in the interior sustained minor damage and are in need of assessments." As for Tripoli's museum, located in the city's Red Castle, "it has been protected very well."

Click here to read this article from Science Insider