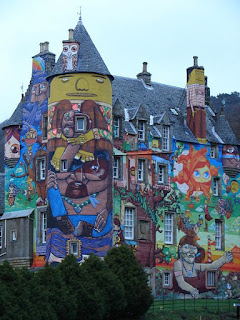 A graffiti project on an old Scottish castle has become more popular than expected. Should it be removed for the sake of preserving the historic building?

Kelburn Castle is just like hundreds of other old Scottish castles with its quaint turrets, grand estate and earl-in-residence - except that one of its outer walls displays a bright psychedelic graffiti mural which has reignited the debate over how Europeans preserve their old buildings.

The Earl of Glasgow, whose family has occupied the castle for the last 800 years, invited four Brazilian graffiti artists to create a work of art on one of the walls in 2007 as a temporary measure. The so-called Graffiti Project involved 1,500 cans of spray paint to decorate the 13th-century castle. It put Kelburn Castle, which lies near the seaside town of Largs on Scotland's west coast, into the top 10 worldwide examples of street art - on the same list as Banksy's work in Los Angeles and Rio de Janeiro's Favela Morro da Providencia.