Because early medieval domestic buildings were usually made of wood, only the stone edifices raised for Christianity and military protection remain, says Rosemary Hill. 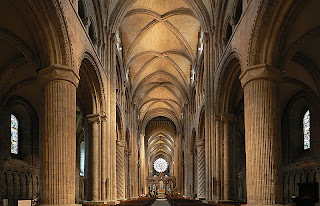 At the heart of the Old English epic poem Beowulf is Heorot, the splendid mead hall built by King Hrothgar to celebrate his victories in war. With its throne room, its patterned floor and its wide and towering gables, this was "the hall of halls", full of feasting and harping but, the poet adds ominously, "awaiting a barbarous burning". Such was the fate of most Anglo-Saxon architecture. Wood was plentiful in northern Europe and cheaper than stone, so houses, even those as grand as Hrothgar's, were built of timber and burned easily and often. Beyond the hints in Beowulf and the remains of halls that archaeologists have found at Cheddar and at Yeavering in Northumberland, the story of early British architecture is almost entirely told through the churches and monasteries for which stone was used. That story begins in the late sixth century with the re-introduction of Christianity and the arrival of St Augustine.

At first it was a matter of make do and mend rather than creativity. Augustine's first church in Canterbury was patched together from an existing Roman one and was in turn swept away by the later cathedral.