A grisly end: 800-year-old remains of witch discovered in Italian graveyard… with seven nails driven through her jaw

These are the 800 year old remains of what archaeologists believe was a witch from the Middle Ages after seven nails were found driven through her jaw bone. The grim discovery was made during a dig on what is thought to be a 'witches graveyard' after another woman's skeleton was found surrounded by 17 dice - a game which women were forbidden from playing 800 years ago. 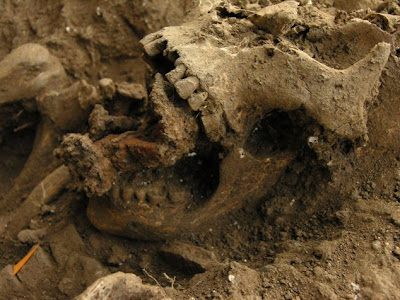 Experts say they believe the women are aged around 25 - 30 years old and were found buried in a simple shallow grave in the ground with no coffin or shroud. The macabre remains were found during a dig close to the sea at Piombino near Lucca in Italy's Tuscany region and the woman had seven nails through her jaw as well as another 13 nails surrounding her skeleton.

Archaeologist Alfonso Forgione, from L'Aquila University, who is leading the dig, is convinced that the women were suspected witches because of the circumstances in which they were buried.