Italian art experts who restored a cryptic medieval fresco depicting a tree of fertility have been accused of censoring the work by painting over the numerous phalluses which dangle from its boughs. 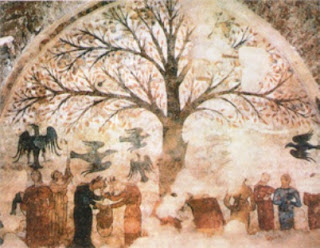 The unusual 13th century Tree of Fertility fresco was discovered by chance a decade ago in the Tuscan town of Massa Marittima and has recently been subjected to a three-year restoration.

The experts who carried out the restoration have been accused of sanitising the mural by scrubbing out or altering some of the testicles, which hang from the tree's branches along with around 25 phalluses.

UPDATE - We received this message on our Facebook page from Cecilia Frosinini:
"I was involved in the researches, preliminary to the restoration. There were additions that were not original and they were rimoved. In a restoration treatment of 10 years ago, the restorers were so excited of finding such a peculiar work of art and of such a subject, that they ADDED many of the phallic elements.

"The present restoration has taken away what was a fake, NOT CENSORING ANYTHING!!!!
There is a lot of press coverage on the right news, on the Italia press: please do not spread the false scoop that was released at the beginning because of sake of scandals."