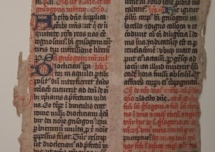 The Consultant College Archivist, Mr John Kirwan, acting on instructions from Monsignor Kieron Kennedy, the College president, proceeded to Dublin to collect the ‘lost’ manuscript from the National Library of Ireland, where it had been found after a year long search amongst its holdings.

This late medieval manuscript which is approaching its 600th birthday is one of a bare handful of devotional books which survives from an Irish context, in the country. It gives us a rare insight into late medieval piety, which period in Ireland lasted about 1100 to 1500 AD. The manuscript also has post Reformation additions which event occurred in Ireland in the 1530s. Thus we get an even rarer insight into the devotional practices of the clergy and laiety of Ossory during a very troubled period of our history – a period which saw much civil and religious change.

Click here to read this article from the Kilkenny People