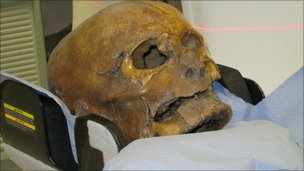 Almost 630 years of waiting are almost over as the face of Suffolk’s most iconic and tragic figure is set to be revealed.

Forensic experts from Dundee University have been working to put a face to Simon Theobald of Sudbury who had his head hacked off by Watt Tyler’s rampaging mob during the peasant uprising in 1381 for his role in introducing the poll tax.

In June the team removed the skull, which sits in a cubby hole in St Gregory’s Church, Sudbury, and took it to West Suffolk Hospital for a series of scans by a radiologist in the first phase of the process to reconstruct his face and reveal what he would have looked like.