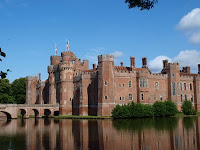 Final preparations are well under way for one of the largest events in the South East when Herstmonceux Castle will witness the battlecry and mayhem of knight battling each other for the annual Medieval Festival.

Now in its 19th year, the festival promisses a colourful spectacle from August 27 to 29.

The stunning setting of the magnificent 15th century moated castle is transformed into a living history encampment populated by more than 1,000 medievalists in authentic garb from all over the world.

Click here to read this article from the Sussex Express