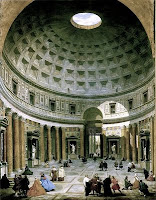 It is one of the best preserved buildings from the Roman world, a 2,000-year-old testament to the immense power and wealth of the empire. But mystery has always surrounded what lies behind the unusual design of the Pantheon, a giant temple in the heart of Rome that was built by the Emperor Hadrian.

Now experts have come up with an intriguing theory – that the temple acted as a colossal sun dial, with a beam of light illuminating its enormous entrance at the precise moment that the emperor entered the building.