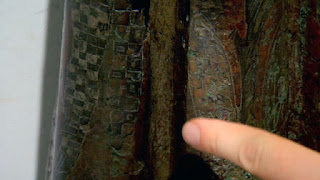 The earliest depiction of Scottish tartan has been discovered – on a fragment of a Roman statue.

The bronze statue once stood on top of a giant triumphal arch in the ancient Moroccan city of Volubilis, in the south-west corner of the Roman Empire, 1500 miles from Scotland. It depicted the Emperor Caracalla – the self-styled conqueror of the Caledonians – riding a six-horse chariot.

The statue, erected 1800 years ago, was destroyed centuries ago, and only a three-foot-long fragment of the emperor's cape remains in a museum in Rabat. Remarkably, the surviving bronze includes the image of a captive Caledonian warrior – wearing tartan trews.

Dr Fraser Hunter, of the National Museum of Scotland, yesterday identified the carving – inlaid with bronze and silver to give texture to the Scottish weave – as the "first-ever depiction of tartan".

Click here to read this article from The Scotland Herald