Archaeogists who have completed the excavation of a 900-seat arts centre under one of Rome's busiest roundabouts are calling it the most important Roman discovery in 80 years. 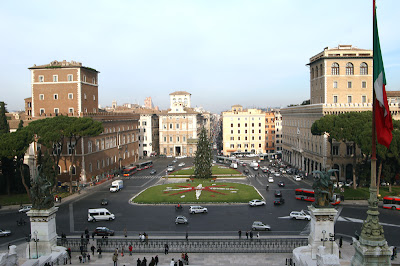 The centre, built by the emperor Hadrian in AD123, offered three massive halls where Roman nobles flocked to hear poetry, speeches and philosophy tracts while reclining on terraced marble seating.

With the dig now completed, the terracing and the hulking brick walls of the complex, as well as stretches of the elegant grey and yellow marble flooring, are newly visible at bottom of a 5.5 metre (18ft) hole in Piazza Venezia, where police officers wearing white gloves direct chaotic traffic like orchestra conductors and where Mussolini harangued thousands of followers from his balcony.