Quebec has two basic tourtieres, and many variations for each type, gastronomy historian Jean-Pierre Lemasson told the McCord Museum conference. There is the shallow style, filled with pork and/or other meats, and a deep-dish Lac St. Jean, or Saguenay, style that contains cubes of meats with vegetables. 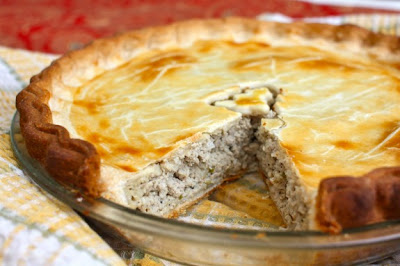 Marcus Gavius Apicius, credited with writing the recipes in what is believed to be the first cookbook (about AD 400), gave us what might be the earliest written recipe for the deep-dish version, he said. It's a pie called La Patina that was made in a bronze pot with four layers of pastry, the top crust with a hole in the centre.

Medieval predecessors of the tourtiere described by Lemasson include Italy's tourte parmesane, pasticchio, timballo, and timpanno. France has a tourte parmenienne, he said, followed by the timbale and the casserole. British meat pies included the Parmesan and Battle Pye, the raised pie, and the Yorkshire Christmas pie.