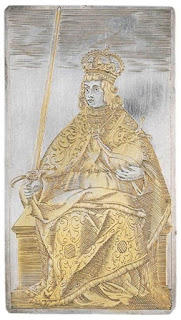 Call it a card player's dream. A complete set of 52 silver playing cards gilded in gold and dating back 400 years has been discovered.

Created in Germany around 1616, the cards were engraved by a man named Michael Frömmer, who created at least one other set of silver cards.

According to a story, backed up by a 19th-century brass plate, the cards were at one point owned by a Portuguese princess who fled the country, cards in hand, after Napoleon's armies invaded in 1807.

At the time they were created in 1616 no standardized cards existed; different parts of Europe had their own card styles. This particular set uses a suit seen in Italy, with swords, coins, batons and cups in values from ace to 10. Each of these suits has three face cards — king, knight (also known as cavalier) and knave. There are no jokers.