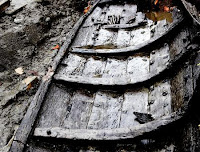 Researchers have now assigned a date to the sensational find of a rowboat. The dating cements the small vessel’s position as Denmark’s only preserved medieval rowboat.


Archaeologists in the Danish town of Vordingborg have every reason to be excited.

During a recent excavation of the moat surrounding the Vordingborg Castle ruins, they came across a fallen castle tower and a rowboat from the Middle Ages. The latter has never previously been found in Denmark.

Lars Sass Jensen, who headed the excavation, says that a dating of the boat’s wooden planks reveals that the little vessel was in its prime around the year 1400.

With this dating, the soon-to-be-opened Danish Castle Centre in Vordingborg can boast of housing Denmark’s only preserved medieval rowboat.