Videos on The Hobbit - news and interviews

Ian McKellen's Expected, New Tolkien Journey Ian McKellen is back as Gandalf in 'The Hobbit: An Unexpected Journey,' the 1st in Peter Jackson's new trilogy from J.R.R. Tolkien's writings. McKellen says Jackson uses Tolkien's style and notes to join 'The Hobbit' to 'The Lord of the Ring.'

Simon Tolkien: "I don't think JRR would have enjoyed watching the films" Simon Tolkien shares his view on the Lord of the Rings trilogy and the latest adaptation of his grandfather's books The Hobbit on 5 live Breakfast with Nicky Campbell and Rachel Burden.

NZ hit by Tolkien fever as Hobbit premiere nears Stars from the new Hobbit movie have joined die-hard fans in New Zealand ahead of the world première of the prequel to the Lord of the Rings trilogy.

JRR Tolkien estate to sue Warner Bros over The Hobbit The estate of The Hobbit author JRR Tolkien is to sue the studio behind a new film adaptation of the novel, over claims of copyright infringement. The suit, filed in California, says film-makers licensed the Hobbit brand for online casino slot machines and other forms of gambling, damaging the author's legacy. The family is claiming $80m (£50m) in damages.

Theresa Russ on Tolkien and The Hobbit With the much-anticipated premiere of The Hobbit coming on Friday, we offer this video interview with Theresa Russ, a Ph.D. student in English at UC Santa Barbara. Russ discusses the evolution of the Tolkien fantasy genre.

Hobbit's Peter Jackson on bringing Tolkien classic to screen Interview "The Hobbit" director Peter Jakson. Jackson talks about the roots of his imagination and pioneering film making, and reveals secrets about the upcoming "Lord of the Rings" prequel. 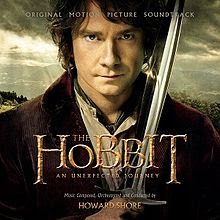