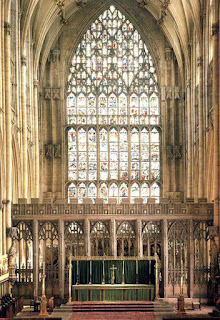 The secrets of the Great East window at York Minster are to be explored in a BBC television documentary. The window, at 78ft (24m) in height, is the UK's largest medieval stained-glass window.

The 311 individual panels reveal a Christian history of the world, as told in the Bible, from Creation to the Last Judgement.

Often referred to as Britain's Sistine Chapel, the window was created between 1405 and 1408 by John Thornton. It is one of the earliest pieces of art by a named artist in England.