A metal detector enthusiast has found a major hoard of Viking silver in a field on the Cumbria-Lancashire border. Darren Webster, from Carnforth, uncovered more than 200 silver pieces including ornate bracelets, coins and ingots in a lead pot.

He said he had searched the same undisclosed location several times before and found nothing.

The silver is now with experts at the British Museum, who described the find as "of national significance". They will reveal their findings at the end of the year. 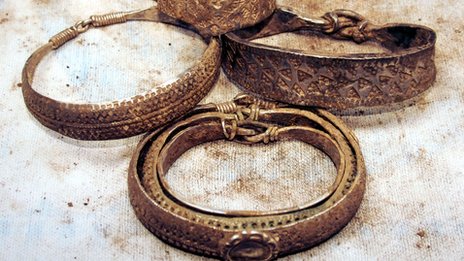 The find of a lifetime: Treasure hunter digs up 200-piece haul of Viking jewellery and coins

A metal detecting enthusiast unearthed 'the find of a lifetime' when he discovered a Viking treasure hoard including 200 pieces of silver jewellery.

Darren Webster dug up a 1,000-year-old casket that also held coins, hacksilver and ingots while scouring at an undisclosed location on the border between Cumbria and North Lancashire. Experts at the British Museum in London say the find is of 'national significance'.