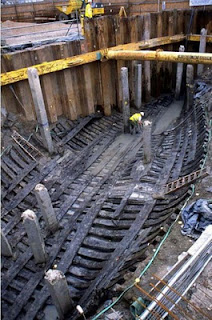 A medieval ship discovered on the banks of the River Usk in Newport in 2002 could be a step closer to finding a home.

Newport Council has put a tender out to developers asking them to recommend a suitable location for the vessel. It is seeking a specialist company who would be able to provide a new museum based around the ship's history.

The vessel has been called the world's best example of a 15th Century ship. Its medieval remains were discovered on the banks of the River Usk as work began on the foundations of a theatre complex.

See also "Sealing the Fate of the Newport Ship"