Burial site discovered in Ireland dates back to the 7th-century 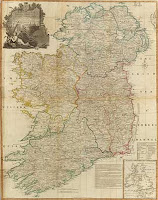 A graveyard dating back to the 7th century has been discovered just of Dublin. The site was uncovered as part of construction on an underground electrical line in the village of Rush by Eirgrid, Ireland’s state-owned electric power transmission operator.

The burial site was discovered in June and tests conducted at Queen’s University, Belfast date the graveyard to between 617 to 675 AD, the pre-Viking era which saw the conversion of the country to Christianity.