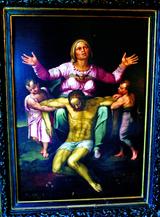 A possible 16th-century Michelangelo painting that hung for years in a local family's home is being displayed in Rome as part of an exhibit of Renaissance art, a development its owner calls a major milestone as he works to have it accepted by the art world.

Scholars disagree on whether "La Pieta With Two Angels" was painted by Michelangelo or by one of his collaborators.

For now, the 19-by-25-inch work is described as "Michelangelesque" in a show sponsored by the philanthropic Rome Foundation, which transported the painting from the Buffalo area to Rome and funded its restoration over the past six months. It will be one of 170 pieces on display from Tuesday through Feb. 12 as part of "The Renaissance in Rome: A Token to Michelangelo and Raphael."