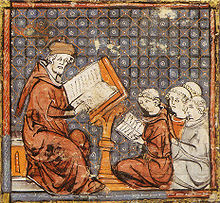 Perhaps the greatest and most enduring achievement of the Middle Ages was the creation of the university, an institution for which there was no precedent in the history of the West. It sprang into existence seemingly out of nowhere in the late 12th century primarily in two cities, Paris and Bologna. Both claim to be Europe’s first. By the early decades of the 13th century, others had emerged modeled on them—Oxford on the Paris model and Padua on Bologna. From that point forward, universities proliferated across the face of Europe and became a standard, important and self-governing institution in larger cities.

Medieval universities, although they differed among themselves in significant ways, all quickly developed highly sophisticated procedures and organizational strategies that we recognize as our own today. The list is long: set curricula, examinations, professorial privileges and duties, a full array of officers of various kinds, division into different “faculties” (we call them schools) and the public certification of professional competence through the awarding of degrees.

Click here to read this article from America: The National Catholic Weekly