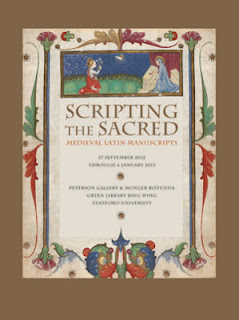 For centuries, Bibles were painstakingly copied and lavishly illustrated, and then cherished from generation to generation. They became the focus of scholarly, creative and mystical activity for a millennium.

You can trace the Bible's literary history in Scripting the Sacred, a Stanford Libraries exhibition of Western European manuscripts and fragments. The exhibition, which opened Sept. 17, continues through Jan. 6, 2013, in the Peterson Gallery and Munger Rotunda of Green Library. The exhibition features about 75 manuscripts and facsimiles – the latter are often valuable collectors' items in themselves, reproducing the shape and flaws of each medieval page. (Some facsimiles show works not included in the current Stanford collections.) Original works date from the ninth century to the 16th century.

The exhibition also includes a few examples of the book's precursor – Greek and Egyptian fragments from the Stanford Libraries' papyrus collection, dating from around the thirdcentury B.C. The exhibition includes early musical notation, books of hours, hagiographies and texts from such early church fathers as Origen, Augustine and Gregory the Great. Typical is a manuscript of The Life of Catherine of Siena, open to the lavishly illustrated frontispiece, circa 1500, previously owned by the 74th Doge of Venice, and a rare, pristine Dialogues by Gregory the Great, owned by Philippa of Guelders, the Duchess of Lorraine and Queen of Sicily. Several elaborate books of hours have illustrated devotions that "strengthen the association between text and temporality, as turning the pages of a book of hours parallels the unfolding of time and the passing of seasons," said Kathryn Dickason, co-curator of the exhibition with David Jordan.

Click here to read this article from Stanford University News

Click here to learn more about Scripting the Sacred