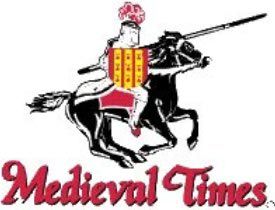 It was with some trepidation that we went to take in a show that featured men dressed as knights jousting with each other. After all, we’re supposed to be serious medievalists, and Medieval Times Dinner and Tournament isn’t exactly an academic conference. However, after taking in a couple hours of sword fighting and chivalry, we can honestly say that we had a really great time.

Medieval Times is a dinner theatre show, where the guests watch a play set within a medieval tournament. It has dozens of performers who play knights, squires, falconers and, of course, royalty. The highlight of the show is watching the knights joust on horseback with each other, leading to impressively choreographed sword fights. While all this is happening, you also get to eat a meal!

This show started in North America in 1983, and has grown to now being based in nine cities. Here in Toronto, they run the show up to three times per day, bringing in up to 700 people for each dinner.

Click here to read this review and watch a video from Medievalists.net