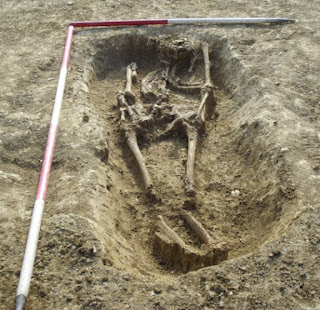 The discoveries were made while carrying out open area excavations on farm land to the western side of Milton Keynes. The site is being developed for mixed use building, where Wardell Armstrong has been commissioned to carry out archaeological surveys as part of the planning permission process.

After trial trenching had revealed potential Iron Age and Romano British remains, excavation work in June this year concentrated on a large circular pit measuring around 7m in diameter and 2.5m in depth. The two Iron Age timbers of around 2.5m in length were found in the base of the heavily waterlogged pit which had provided the perfect anaerobic conditions for preservation.

Very few examples of notched log ladders have ever been found in Britain, and it appears that these two examples may be the largest yet discovered. They seem to have been used as steps down to the base of the pit to extract clay for use in building, lining or waterproofing.

Wardell Armstrong Archaeology carefully removed the log ladders which were then transported to the York Archaeological Trust who specialise in the conservation of timbers of this size. The process will take around 18 months to complete, after which they will be put on display in a local museum. The timbers could date to between 800BC to 100AD, but dendrochronology will be used to establish a more precise date.

Click here to read this article from Timber in Construction