Rare poems documenting the persecution of Norwich's medieval Jewish community, in the period preceding the expulsion from England in 1290, are being given a new lease of life thanks to the work of a dedicated group of residents. 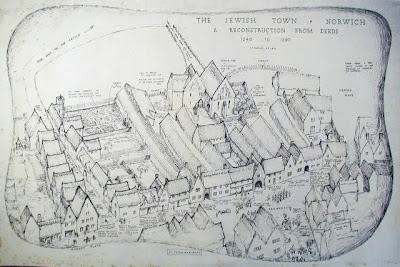 The East Anglia town was one of the hubs of Jewish life in medieval Britain, along with York and London. It became notorious in 1144 when the first recorded "blood libel" occurred there, following the discovery of the bloodied body of William of Norwich on the outskirts of the town, and persecution and attacks on the Jewish community remained common in the subsequent 150 years.

It is estimated that up to 150 Jews were living in the town in the 13th century, among them Rabbi Meir Ben Eliahu, a poet known as "Meir of Norwich" who wrote at least 20 poems.

Little is known about Rabbi Meir and it is not clear whether or not he completed his writing after fleeing England, but his connection to the town is made clear in one poem, where the initial lines are an acrostic that spell: "I am Meir, son of Rabbi Eliahu, from the city of Norwich which is in the land of isles called Angleterre. May I grow up in the Torah of my Creator and in fear of him; Amen, Amen, Selah."