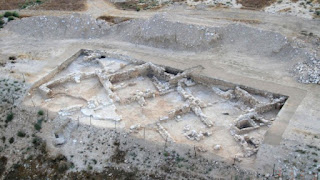 Israeli archaeologists digging on the route of a planned highway have found new ruins from a 1,500-year-old Jewish town, the Israel Antiquities Authority said Sunday.

The remains of two Jewish ritual baths and two public buildings were uncovered in a salvage dig ahead of the paving of a new section of Israel’s Highway 6, a north-south toll road eventually slated to run much of the length of the country.

Both of the public buildings feature raised platforms along the walls facing Jerusalem, archaeologists say — a trademark feature of Jewish houses of prayer.

The highway will be rerouted to preserve the ruins, the IAA statement said.

Click here to read this article from The Times of Israel