Was it the hammer of the Gods that drove Viking ships to new lands, or the light-polarizing qualities of a crystal called Iceland Spar?

Ancient Viking mariners may have been able to navigate the high seas from Norway to North America centuries before Christopher Columbus thanks to a crystal "sunstone" GPS, according to new French research.

The crystal, called Iceland spar, is a transparent form of calcite that is sensitive to the polarisation of light and is commonly found in Scandinavia. 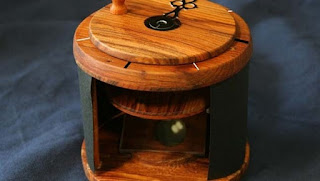 To avoid getting lost on their voyages across the North Atlantic 1000 years ago, Vikings relied on the sun to determine their heading. (This was long before magnetic compasses had been invented.) But cloudy days could have sent their ships dangerously off course, especially during the all-day summer sun at those far-north latitudes. The Norse sagas mention a mysterious "sunstone" used for navigation. Now a team of scientists claims that the sunstones could have been calcite crystals and that Vikings could have used them to get highly accurate compass readings even when the sun was hidden.

The trick for locating the position of the hidden sun is to detect polarization, the orientation of light waves along their path. Even on a cloudy day, the sky still forms a pattern of concentric rings of polarized light with the sun at its center. If you have a crystal that depolarizes light, you can determine the location of the rings around the hidden sun.