Interview with Jay Rubenstein - Armies of Heaven: The First Crusade and the Quest for Apocalypse 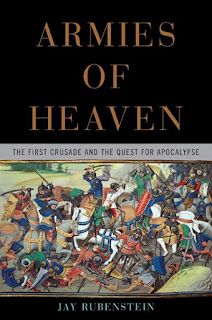 When he began looking at the First Crusade (1095-1099 ), Jay Rubenstein was expecting to write an academic paper or two demonstrating that the European Christians who answered the call of Pope Urban II to liberate Jerusalem from its Muslim rulers were motivated by something other than an apocalyptic vision. In fact, his research led Rubenstein, an associate professor of medieval history at the University of Tennessee, to write a highly accessible history of the First Crusade arguing that the nobles and peasants who fought the Crusade intended to usher in the End of Days and the return of Jesus Christ. In Armies of Heaven: The First Crusade and the Quest for Apocalypse (Basic Books; 448 pages, $30 ), Rubenstein tells the story of the blood-drenched, costly and logistically ambitious war from the point of view of those who conducted and experienced it, and the chronicles they left behind indeed suggest not only that they believed the Apocalypse was approaching, but that it had arrived.

Rubenstein, 44, grew up in Oklahoma, and received his Ph.D. from the University of California, Berkeley. His honors have included a Rhodes Scholarship at Oxford University, and, in 2007, selection as a MacArthur Fellow, a lucrative honor that brings a grant of $500,000 over a five-year period. He spoke with Haaretz from his home in Knoxville, Tennessee.