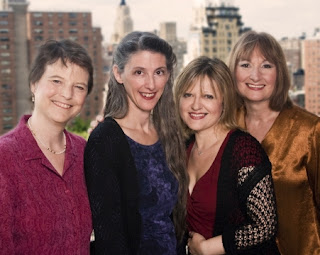 Ironically, one of the most acclaimed names in classical vocal groups for the past quarter-century has been Anonymous 4.

On Saturday, at Mountain View's Community School for Music and Arts, the fabulous female foursome offers an "Informance," a one-hour program of performance and conversation, presented by Stanford Lively Arts. Anonymous 4 will demonstrate the building blocks of creating arrangements for their medieval songs and chants.

In 1986, in New York, the four women of Anonymous four came together, from different musical backgrounds and with different musical instincts. "For us, it was an experiment," said founding member Marsha Genensky, a Menlo Park resident. "All of us knew each other from singing in other groups that did slightly later early music, Renaissance music."

They wondered what medieval music would sound like in higher voices. "In the mid-1980s, women were not singing medieval music professionally. So we didn't know what it sounded like. And we couldn't go back to the Middle Ages to find out," Genensky said, laughing. "We tried it, loved the sound and decided to do a program. Then we wanted to do another program. We had a passion for it and worked really hard at it. At a certain point, we made a pact among ourselves to forego other freelance work, so that we could focus all of our rehearsal and performance time on creating this sound with this one set of people. It snowballed and here we are, 25 years later."

Click here to read this article from the Mercury News