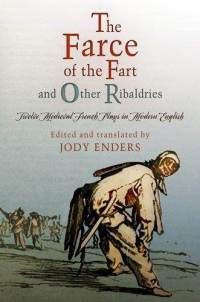 They were the sitcoms of their time –– lowbrow comedies that lampooned every serious topic, from sex and relationships to politics and religion. In her new book, ‘The Farce of the Fart’ and Other Ribaldries –– Twelve Medieval French Plays in Modern English, Jody Enders, a professor of French at University of California – Santa Barbara, translates a dozen of these theatrical gems and brings them into the 21st century.

More than a study in literary criticism, for entertainment value and a peek into 15th- and 16th-century life and wit, ” ‘The Farce of the Fart’ and Other Ribaldries, ” is unequaled. Enders captures the colorful characters, coarse humor, and outrageous plot lines of medieval dramas that have, for the most part, been inaccessible to contemporary readers and theater audiences. “Except for about a dozen from the hundreds that have survived over the centuries, none have been translated into English,” Enders said. “And many of them haven’t been translated into modern French, or any modern vernacular. So they’re kind of untouched.”