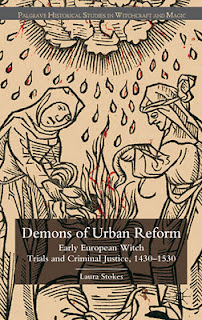 A dark but iconic moment in U.S. history, the Salem witch trials of 1692, are taught in American schools to educate students about religious extremism and the judicial process. But the origins of witchcraft prosecution can be traced back to Europe centuries prior, when pre-Reformation courts first induced criminals to admit to heresy and witchcraft to exert social control through displays of harsh and often violent punishment.

Laura Stokes is an Assistant Professor in Stanford’s Department of History, whose work has mostly focused on the origins and prosecution of witchcraft in fifteenth century Europe. Her Ph.D. dissertation, which chronicled the rise of such persecution as well as its linkages to developments in judicial torture, has now been revised into a book, Demons of Urban Reform: The Rise of Witchcraft Persecution, 1430-1530.

Focusing on case studies from the European cities of Basel, Lucerne, and Nuremburg, Stokes’ work examines the legal underpinnings of witchcraft persecution as well as the religious and esoteric influences that fueled it.

Click here to read this article from Stanford University