What The Onion can teach us about the Middle Ages

They bill themselves as 'America's Finest News Source' and after seeing the competition, its hard to disagree. The Onion is well worth reading, as is the site Literally Unbelievable, which shares peoples reactions to their stories.

It seems someone at The Onion has a soft spot for the Middle Ages. Here is their latest article to feature our era of history:

If I Could Live In Any Decade, It Would Definitely Be The 960s

Jonathan Soifer is nostalgic for the time of Edgar the Peaceful, Reginold of Eichstätt and Heriger of Lobbes! At least when the Byzantines and Bulgarians weren't fighting each other.

The best lines: "God, what I wouldn’t give to have been a vassal. Or even a peasant. Wouldn’t matter—everyone was cool back then. Primogeniture wasn’t even the law of the land yet, so a king’s death just signaled a free-for-all among his family and neighboring lords." 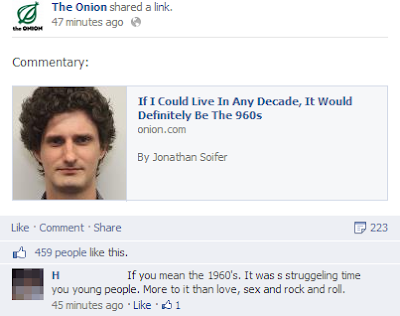 That is not the only article to be featured. Check out these other journalistic gems from The Onion:

I Would Have Been Considered Very Attractive In The Middle Ages

Lyle Hume thinks he "would've turned more than a few wenches' heads back in 1350." Judging by his picture I think he would he is being overly optimistic.

The best lines "Of course, at 27, I would've been getting on in years, but I don't think the maidens would have held it against me. They might have been greatly attracted to someone roughly their fathers' age who had managed to hold onto most of his teeth and remain leprosy-free. Plus, I have gout. The disease of kings!"

This article, from 1997, was eerily accurate! Best line: "Byzantine Emperor Constantine XI could not be reached for comment."

I guess we were all so concerned about the Byzantine Empire that we did not see this other major geo-political event. Best line: "I can't believe how easy it was to claim Kiev for the Kingdom Of Ealdormere," said Royal Peer Gawain Falconsfyre, a 44-year-old tech-support assistant from a suburb of Toronto. "It was a piece of cake. Haven't any of these Russians ever heard of a moving-shield-wall offense?" 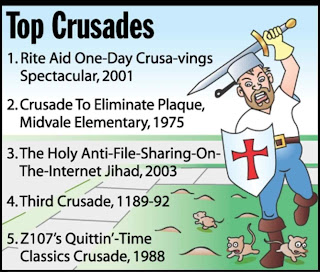