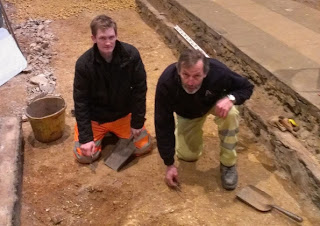 Archaeological work being done at St.Hilda's Church in Hartlepool has turned up an Anglo-Saxon grave. Other burials from the Early Modern period were also found, as the church is digging up a section of its floor to install a new heating system.

The discovery might be evidence that an Anglo-Saxon monastery existed on this site. Bede records that a nun named Heiu founded a monastery in the area named Heruteu in the 640s.

Dr Steve Sherlock, of Tees Archaeology, said: “It’s an exciting thing. We hope to do more work to understand it. It’s always presumed that there was a church here in Norman times in 1066. We note that the church is sited in the area of St Hilda’s Anglo-Saxon monastery, about 60ft north of the present church.

“It’s always been presumed that this church was the site of St Hilda’s Anglo-Saxon monastery. We haven’t found any trace of that, but this one burial may be one of the clues pointing towards that.”

Click here to read the full article from the Hartlepool Mail