Found in China, what to find in Iceland, and why we may never find the secret of the Voynich Manuscript 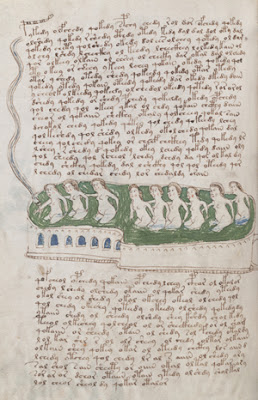 The Voynich Manuscript has confounded scholars ever since it was revealed by a book dealer named Wilfrid Voynich in the early part of the 20th century. There have been several theories of when this odd manuscript, which contains bizarre images and indecipherable writing, was created, with some believing it dates back to the Middle Ages.

In his article Cracking the Voynich Code, Batya Ungar-Sargon takes a look at the history of the manuscript. Radiocarbon dating finds that the manuscript was made between 1404 and 1438, although we do not know when the ink was written on it. Still, some believe the manuscript is really just a hoax, perhaps created in the 17th or even the 20th century.  You can read the article on Tablet Magazine.

Icelanders are seeing the potential value of its medieval archaeological sites as tourist attractions, according to an article in the Iceland Review Online. Ólöf Ýrr Atladóttir, director general of the Icelandic Tourist Board, explains that “Nature still has the most attraction but culture, in a broad sense, is gaining popularity. Tourists are constantly seeking new experiences and not least the interplay between daily life and nature through centuries. Strategic development of tourism related to cultural values like archaeological remains plays a big part in that context.”

However, she also warns that the her country needs to do a better job protecting archaeological sites from environmental degradation. Click here to read this article from Iceland Review Online.

Meanwhile, Chinese archaeologists report that they might have discovered the tomb of Emperor Yang Guang, who was the last ruler of the Sui Dynasty. The small tomb contains a gravestone that identifies the emperor and relates events about the year he died, 618. However, Shu Jiaping, head of Yangzhou's Institute of Archaeology, warns "we're still not sure whether it was the emperor's final resting place, as historical records said his tomb had been relocated several times."

Emperor Yang Shang had a very active rule, ordering major building projects including a Grand Canal and rebuilding large parts of the Great Wall. But his construction work and military campaigns bankrupted the state, eventually leading to a coup in which he was murdered. Click here to read the full article from the China Daily.