BoingBoing has just posted an article Shedding light on the Black Death, which offers a good overview of recent research on the plague that struck the medieval world in the 14th century. It includes an interview with Sharon DeWitte of the University of South Carolina, who is one of the leading researchers in the field. She raises some of the important questions still being asked about the Black Death, such as why it was destructive. “The Black Death killed between 30 and 50 percent of the affected population,” she notes. “Modern plague, at most, kills between 2 and 3 percent, and that’s even in areas without access to modern medicine.” 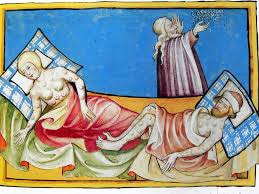 They also note that the recent find of a possible Black Death cemetery in London might be very helpful in this area of research.

The Northampton Chronicle and Echo reports that archaeologists have discovered one of the buildings that was part of Northampton Castle in the 12th century. One archaeologist comments that "we’ve had an awful lot of animal bones, including a dog’s jaw, which could have been a hunting dog from the castle, or maybe a domestic animal.”

Here is a video about the dig:


For those looking to donate some money to worthy history-related causes, please check out a couple of items on Indiegogo and Kickstarter. Tania Picard-Braun emailed us to let us know about her fundraising drive Help Me Go To Graduate School. She is hoping to raise $1000 to help her go to the University of Manchester where she will study for  a Master's degree in Medieval Studies. Tania wrote "I've known I've wanted to be a historian since I was a little kid and that the Middle Ages was my favorite historical period since I was in High School.  While still an Undergraduate, I presented my first academic paper at Plymouth St. University's Medieval and Renaissance Forum titled “The Middle Ages in Buffy the Vampire Slayer: Images and Symbols".

Meanwhile, at Kickstarter you can find Ian Crowe looking to raise $9000 to create an art book featuring the 100+ stories of Ovid's masterpiece, Metamorphoses. He writes, "The fact is, despite being so pivotal, Metamorphoses is not as widely read as you'd think. Not anymore, anyway. Maybe it's the length of the book that turns people off. Maybe it's the lack of pretty pictures. Either way, I intend to do something about it."

Speaking of worthy causes, we could always use your support too! :)