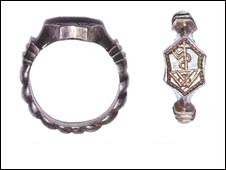 An inquest in Bristol has ruled that a 500 year old silver ring, found on a medieval settlement site, must to be sold to a local museum. The ring is thought to have once belonged to a 15th century mayor of Bristol.

It was discovered by 74-year-old Jerry Morris while he was out metal detecting in a field in the village of Alveston, just north of Bristol, on December 21, 2008.

The find came to light at a 'treasure trove inquest' held to determine whether or not it is an official 'treasure'.

Coroner Terry Moore decided it did qualify, and as a result Mr Morris will have to offer it to a museum at a price to be decided by an independent board.

Mr Morris, from Shirehampton, Bristol, said: "The loss of a personal seal must have been an absolute disaster as he lived in very troubled times with the War of Roses taking place and his seal could have been misused by others at that time."

It is believed the ring, which was brought to Bristol from the British Museum, in London, for yesterday's inquest at Flax Bourton Coroners' Court, would have been worn by the mayor over a glove because of its size.

It will take up to a year to discover the value of the ring. Bristol City Museum and Art Gallery are likely to make a bid for the ring, with a percentage going to Mr Morris and the landowner on which the ring was discovered. The name of the landowner was not revealed at the inquest.

The current Lord Mayor of Bristol, Christopher Davies, said: "It is a very remarkable find by Mr Morris. It will take up to 12 months to assess costing. William Spencer was lord mayor on three occasions, and there are records saying it was lost during his time."

Mr Morris took up metal detecting and joined Severnvale Historical Research and Detecting Society when he retired from his job as a logistics manager with British Aerospace 20 years ago.

Among his other important historical finds is the seal of Thomas the Chaplin, from the early 14th century, found at Wedmore, Somerset.

Recalling the day he found the ring, Mr Morris told the court: "I was getting the usual buttons and things and then suddenly in front of me was a 15th century medieval silver thumb ring. The condition was so that all I had to do was wash it under the tap to clean it. I knew straight away that it was a medieval seal thumb ring, but I never thought I would find one."

Mayor Spencer was accused of treason and imprisoned for a few weeks, but was released under the instruction of King Edward IV. He helped fund a number of voyages from Bristol at a time when the famous Matthew journey was being planned.

The court heard that it was likely the ring had been lost and never moved from its location. Mr Moore concluded: "On the balance of probability, I am satisfied with the silver content of the ring, and that it is over 300 years old."