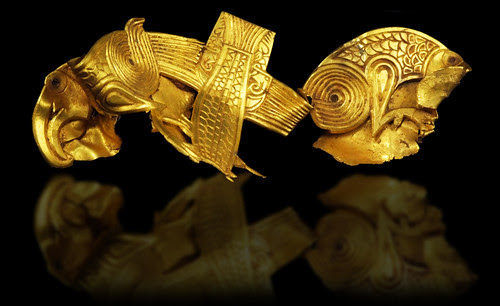 The news of the discovery of a massive Anglo Saxon treasure hoard in Staffordshire has been receiving a great amount of media coverage from around the world. We will try to keep you updated with any further news about the find.

Some more information about the find has come out within the last few hours. First is a detailed commentary about the treasure hoard from one of the medievalists who has been working on the artifacts.

Dr Kevin Leahy, National Finds Adviser from the Portable Antiquities Scheme. Kevin is an expert in early medieval metalwork and Saxon craftsmanship. Here are some of Kevin’s initial analysis of this remarkable find:

“The two most striking features of the Hoard are that it is unbalanced and it is of exceptionally high quality. Unbalanced because of what we don’t find. There is absolutely nothing feminine. There are no dress fittings, brooches or pendants. These are the gold objects most commonly found from the Anglo-Saxon era. The vast majority of items in the Hoard are martial - war gear, especially sword fittings.

“The quantity of gold is amazing but, more importantly, the craftsmanship is consummate. This was the very best that the Anglo-Saxon metalworkers could do, and they were very good. Tiny garnets were cut to shape and set in a mass of cells to give a rich, glowing effect; it is stunning. Its origins are clearly the very highest-levels of Saxon aristocracy or royalty. It belonged to the elite.

“Most of the gold and silver items appear to have been deliberately torn from the objects to which they were originally attached. We have over 80 gold and garnet pommel caps, and there also appear to be fittings from helmets.

“This is not simply loot; swords were being singled out for special treatment. If it were just gold they were after we would have found the rich fittings from sword belts. Perhaps gold fittings were stripped from the swords to depersonalise them – to remove the identity of the previous owner. The blades would then be remounted and reused.

“It looks like a collection of trophies, but it is impossible to say if the Hoard was the spoils from a single battle or a long and highly successful military career. We also cannot say who the original, or the final, owners were, who took it from them, why they buried it or when. It will be debated for decades.

“We don’t know how it came to be buried in that field, it may have been a tribute to the pagan gods or concealed in the face of a perceived, but all too real, threat, which led to it not being recovered. When we have done more work on the Hoard we will be able to say more about it.

“Despite their war-like nature the decoration on these objects is delightful; Some are decorated in what is known as “Anglo-Saxon Style II” which consist of strange animals, interlaced around each other, their long jaws intertwined. There is a joy to it. Many objects are inlaid with garnets and even covered in earth the colour is still breath-taking.

“There is so much material in this Hoard that we may have to rethink seventh century metalwork. Earlier finds will be looked at in the context of what we find amongst this mass of material. In the past the seventh century has always been looked at from the point of view of East Anglia and Kent. It’s going to be hard to forget the Midlands after this! There are exciting times ahead.

“The discovery of this Hoard in Staffordshire should cause no surprise. It is in the heartland of the Anglo-Saxon kingdom of Mercia which was militarily aggressive and expansionist during the seventh century under kings Penda, Wulfhere and Aethelred. This material could have been collected by any of these during their wars with Northumbria and East Anglia or by someone whose name is lost to history. Here we are
seeing history confirmed before our eyes.”

Furthermore, for those interested in what was written on one of the artifacts - a gold strip - the text is in Latin and it is from a Biblical verse - the Book of Numbers, Chapter 10 verse 35 and reads: 'Surge domine et dissipentur inimici tui et fugiant qui oderunt te a facie tua'. The English translation would be: ‘Rise up, o Lord, and may thy enemies be dispersed and those who hate thee be driven from thy face'

We will try to bring you more information about some of the individual pieces from this find.

Please see also our earlier articles: Massive Anglo Saxon hoard discovered and our collection of eight videos about the discovery.