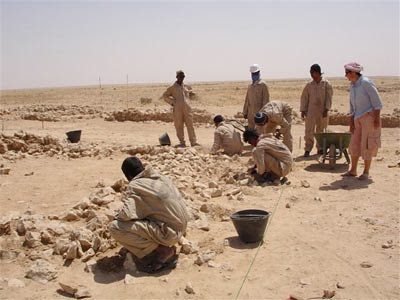 In a remote rural community in northwest Qatar, not far from the sea, a team of French and Qatari archaeologists is slowly bringing a medieval part of the country’s cultural heritage back to life after it lay untouched for centuries under the sands of Murwab.

The 1.6km long and 0.5km wide site they are excavating — a remarkable village of 220 houses, two forts and two mosques — is gradually yielding artifacts from the 9th century Abbasid period. “Murwab is an exceptional site in that the settlement dates exclusively from the 9th century at the very beginning of the Abbasid period,” the Chief for the archaeological campaign, Dr Alexandrine Guerin told to media ahead of its formal London announcement late last month.

An exceptional session on the archaeology of Qatar was held at the British Museum, London in July as part of The Seminar for Arabian Studies 2009. This featured lectures by representatives from universities and academic institutions on recent research and excavations conducted as part of an initiative by the Qatar Museum Authority (QMA).

One of the sessions highlighted the Islamic period archaeology of Qatar. Excavations and the study of ceramics from the 9th century Abbasid period in Murwab was described by the French team headed by Guerin that has been exploring the chronological development and functions of different areas of the settlement.

“The site is remarkable by the number of houses that are concentrated in a very restricted area with different settlement patterns from one neighbourhood to another,” said Guerin.

Guerin has been Chief of the French archaeological mission to Qatar since 2002. With Faysal Al Nai’mi, she is heading the Murwab archaeological campaign. The settlement belonged to ordinary people, uncovering a ceramic kitchenware, bronze oil lamps, shells- dating from a period spanning a century among others.

“There has been exceptional settlement in two phases spanning the 9th century, in the beginning of the Abbasid period which is little known in written historical records,” says Guerin.

So far the finds show that the inhabitants of the area did not live exclusively the desert wanderers’ lives of shepherds but they were also partly fishermen or pearl divers, perhaps alternating the two different ways of life every six months.

“We are excavating the houses that were inhabited by ordinary people. We have excavated more than 20 houses in two years and found marvellous artefacts typically of the 9th century in the same floor, same space, same level which means dating during the same period. This gives us the complete picture of daily lives of ordinary people for which there is little or no historical records.”