Experts have uncovered one of the six angel mosaics within the world-famous Hagia Sophia Museum in Istanbul after it had been hidden for 160 years behind plaster and a metal mask.

The mosaic, which measures 1.5 meters by 1 meter, was last seen by Swiss architect Gaspare Fossati, who headed restoration efforts at the museum between 1847 and 1849, and Ottoman Sultan Abdülmecid. Experts were surprised to see that the mosaic, believed to date from the 14th century, was so well preserved.

The mosaics were plastered over according to Muslim custom that prohibits the representation of humans.

Some of the mosaics were revealed when the domed complex was turned into a museum in 1935, but the seraphim had largely remained covered, Ahmet Emre Bilgili, who heads culture and tourism affairs in Istanbul, told The Associated Press.

"It is the first time that the angel is being revealed," he said, adding that the figure had been covered with metal and plaster. "It is very well preserved."

Experts would now work to uncover the second seraphim, which was also plastered over and covered by metal, Bilgili said.

The uncovered mosaic is located in the pendentive, an arched triangular section supporting the building’s huge dome. After 10 days of work on the area, experts removed several layers of plaster and the metal mask to uncover the angel.

The mosaic’s true age will be assessed after an analysis by the Hagia Sofia Science Board compares it to similar mosaics. According to the Bible, the six-winged angels are called Seraphim. They are the closest angels to God. They surround God's throne. There are four Seraphim corresponding to the four winds of the world. They each have six wings corresponding to the six days of creation. 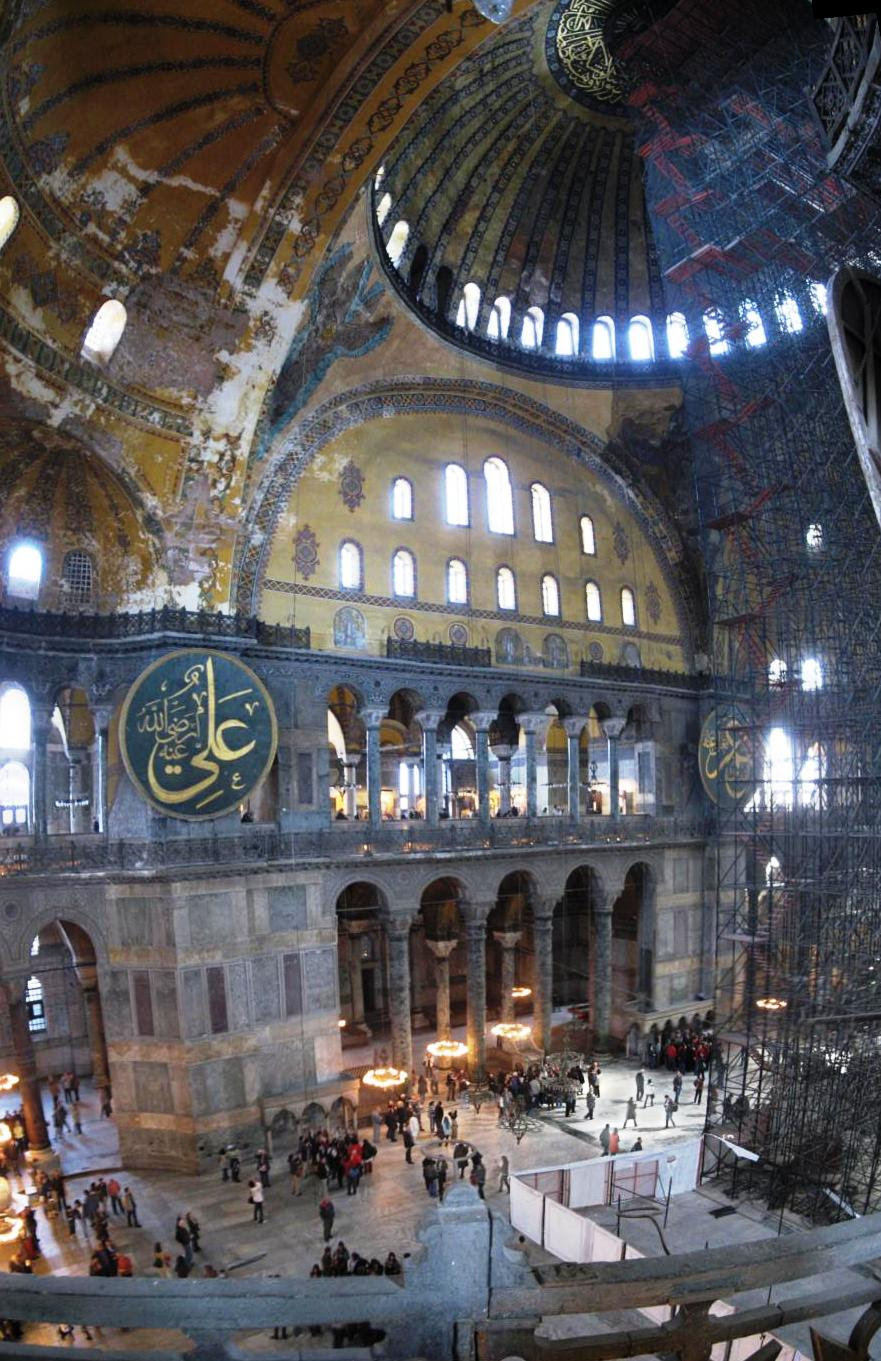 Hagia Sophia has been a Christian place of worship for 916 years, then converted into a mosque and served Muslims for 481 years. Hagia Sophia Museum was opened in 1935 and ever since it has been attracting thousands of visitors every year.

According to Byzantine historians the first building of Hagia Sophia church was established during the reign of Constantius I (324 – 337 AD). It was a basilica with a wooden roof, and it was burned down during a revolt.

During the reign of emperor Theodosius Hagia Sophia was built for the second time and opened to the public in 415 AD. The basilica was again burned down during the Nika Revolt in 532 AD. Some ruins of this building were discovered during excavations in 1936. There were stairs indicating the entrance of the building, columns, capitals and other fragments of the building.

Emperor Justinian (527 – 565 AD) wanted to build a church bigger than two previous ones, which would represent the power and magnificence of empire. The new building of Hagia Sophia was designed by two famous architects of that era – Isidoros from Miletos and Anthemios of Tralles. Many columns, capitals, marble and colourful stone were brought to Istanbul from various ancient cities in Anatolia and used in construction works of Hagia Sophia.

The works were commenced on December 23, 532 AD and completed on December 27, 537. The new building consisted of a large central nave and two side aisles, separated by columns, apse, inner and outer narthex. The size of the inner space of basilica is 100 X 70m and it is covered by the magnificent dome (diametre 30.31 m), supported by the four large piers, 55 m high.