Monasteries of Ely and Bury St Edmunds feuded over church 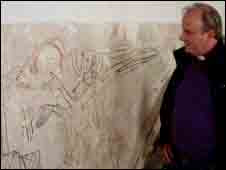 A major conservation project recently completed in a remote Suffolk church has unearthed startling evidence of a medieval conflict between two of the most powerful religious establishments in England.

The project, undertaken to conserve the medieval wall paintings in the church of St Mary the Virgin, Lakenheath, led to the discovery of a number of previously unidentified images. These paintings, combined with a documentary research project, point to a power struggle between two of the richest monasteries in England that reached down into the very heart of the parish church.

The church at Lakenheath still retains large fragments of at least five different paint schemes that cover a period of over four centuries. However, the recent project has linked the three earliest of these schemes, dating between circa 1220 and 1360, with a series of conflicts and legal battles between the religious houses of Ely and Bury St Edmunds. It is recorded that the church itself was owned by the monks at Ely, who spent a great deal upon its expansion and rebuilding, yet it sat just within the ‘Liberty of Saint Edmund’ – the area of land over which the Abbey at nearby Bury St Edmunds had almost complete legal control. 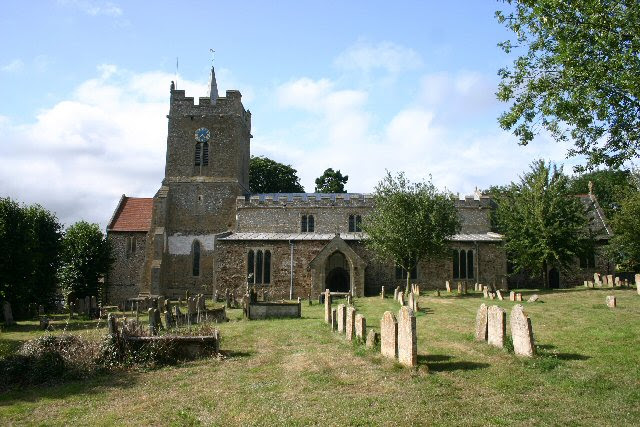 It has always been known that Lakenheath was the focus for conflict between the major religious houses at Bury St Edmunds and Ely. In 1221 the monks of Ely obtained a charter allowing them to hold a market within the parish. The monks of Bury St Edmunds objected strongly to, what they believed to be, an infringement of their own rights and the case was actually put before the king. Although the king found in favour of Bury St Edmunds the monks of Ely carried on with their market. Eventually the Abbot of Bury was forced to send a group of armed men into the parish to forcibly close down the market and carry away the goods. The conflict between Bury and Ely didn’t end with the markets closure and ill feeling rumbled on for centuries to come.

“The two earliest schemes”, explains project manager, Matthew Champion, “show a marked devotion by the parish to the churches owners at Ely. However, in the years immediately after the Black Death, the monks at Ely took a very hard line with their tenants, particularly here in Lakenheath. It appears that this turned the parish against their own landlords and thereby encouraged them to switch their personal allegiance to the more kindly neighbouring house at Bury St Edmunds. It was in these chaotic years immediately following the plague that the church was redecorated for a third time. In this scheme the old political loyalty to Ely appears entirely cast aside. Instead, in the most prominent position in the church, we find a new painting of St Edmund. It was a very bold statement indeed and would have been the first thing you saw as you walked in the door. It was a real slap in the face.”

“What’s really fascinating”, continues Matthew Champion, “is that the conflict between the two religious houses appears to have reached right down to the parish level. It went beyond the financial and legal posturing of two great local powers and split the very parish church in two. The Chancel was devoted to Saint Audrey and Ely whilst the local parishioners, who controlled the Nave of the church, were openly declaring their devotion to the rival Saint Edmund.”

The discovery of the significance of the Saint Edmund painting hasn’t been the only surprise to come out of the project. Although the wall paintings in the church were known to be significant the recent work that has been carried out has highlighted a number of other important features. Most importantly was the discovery of an almost complete paint scheme that leading wall painting expert David Park, of the Courtauld Institute, has dated to circa 1220-30.

“This early scheme is a tremendous find”, states the Reverend Robert Leach, Vicar of St Mary the Virgin, “that was entirely unexpected. The early paintings are almost complete on one whole side of the nave. In effect, it allows us to visualize exactly how the inside of the parish church must have looked nearly eight centuries ago. I believe that painted decoration as early as this is quite a rarity and that this is one of the earliest complete schemes surviving anywhere in the country. We in the parish feel immensely privileged to worship in such a building.”