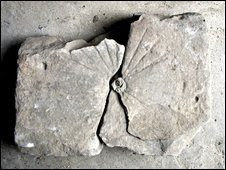 With no clocks or watches – how did the medieval brethren at the island abbey of Inchcolm know when to eat, sleep and pray?

The Augustinian canons lived according to a strict routine, and it was essential that everyone in the community did the right thing at the right time.

A new discovery at Inchcolm Abbey, in the Firth of Forth, reveals that the Augustinian canons who once lived on the island measured time using a mass dial. This specialised form of sundial was carved into the south-facing walls of some churches and monastic buildings.

While well-known in England, the British Sundial Society says relatively few are known in Scotland.

The one at Inchcolm, which has been broken in two, was discovered by Historic Scotland collections registrar Hugh Morrison and medieval stones expert Mary Márkus.

They were carrying out preparatory work for a project to examine and catalogue a collection of around 50 pieces of carved medieval stone which are in safe keeping at the abbey but have never been studied.

Hugh said: “While sorting through the stones I found a fragment with distinctive radial markings carved on it that reminded me of mass dials that I had seen on churches in Gloucestershire.

“In a separate location I turned over another stone and was really pleased to discover that it fitted together with the other half of the mass dial.

“Better still, it still has the corroded stub of the iron gnomon which would have once cast its shadow along the radial markings of the dial.

“It was good to be able to reunite the two pieces again. Eventually it may even be possible to find its original location on the south side of the abbey.”

More than 7,000 detached carved stones have been documented at Historic Scotland properties.

They often provide key evidence for reconstructing long-lost features from castles, palaces, abbeys and many other monuments.

The mass dial will help visitors gain an insight into medieval life by showing how time was measured, and how people organised their lives, before the arrival of clocks and watches.

Hugh said: “Medieval timekeeping was very different from our present day dependency on the accurate measurement of time for catching trains, getting to work or viewing TV programs.

“Changing seasons and weather meant that mass dials could not always be used but when the sun shone they provided a relative means of coordinating community activities.”