Landscape with Two Saints: How Genovefa of Paris and Brigit of Kildare Built Christianity in Barbarian Europe 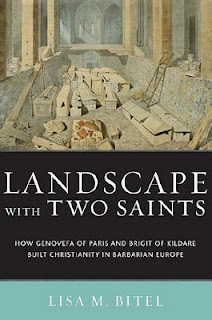 Lisa Bitel, professor of history and religion at the University of Southern California, has released a new book this year that explores how ordinary people learned to become Christians at the start of the Middle Ages. She tells the broader story through the tales of two Christian women leaders.

Landscape with Two Saints: How Genovefa of Paris and Brigit of Kildare Built Christianity in Barbarian Europe focuses on the two holy women who lived in the late fifth and early sixth centuries, and who helped to develop the Christian church in northern France and Ireland during a turbulent period of history.

“Women couldn’t be priests; they couldn’t go and baptize a thousand,” Bitel said. “But they could be the ones facilitating this change of religious habits. They sponsored the building of churches and holy places. These women were role models. They were hugely influential.”

The history of Brigit and Genovefa explains not just how these legendary, peripatetic women became targets of devotion, but how and where Europeans became Christian and what religion meant to them on a daily basis. The story of these two saints also demonstrates the pervasive influence of gender and ethnicity, as well as regional culture and material environment, on the process of religious change.

Through Genovefa and Brigit, Bitel demonstrates what the written words of missionaries and theologians never can: the active participation of converts in the history of their own conversion.

Because her field is more esoteric than many, Bitel said it is a challenge to attract a general audience. “It’s harder for me, because someone like Henry Hudson, or something related to American history is a natural draw for students who have gone through U.S. schools,” Bitel noted. “When you get into something more exotic like the distant past of Europe, the past of religion, and especially if you throw in a gender perspective, it’s a little harder to get the masses in the classroom.

“So part of my job is to get people interested in the distant past. To persuade them that they will find something useful and relevant.”