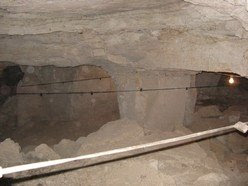 Archaeologists from the University of Haifa have discovered the largest underground quarry in the Holy Land, dating back to the time of Jesus and containing Christian symbols etched into the walls.

The 4,000-square-meter cavern, buried 10 meters beneath the desert near the ancient Palestinian city of Jericho, was dug about 2,000 years ago and was in use for about four to fiove hundred years, archaeologist Adam Zertal said.

The cave's main hall, about three meters tall, is supported by some 20 stone pillars and has a variety of symbols etched into the walls, including engraved 31 crosses, a zodiac-like symbol, roman numerals and a Roman legion's pennant. The crosses are believed to have been made around the year 350 AD.

Zertal said his team from Haifa University first discovered the site three months ago while they were putting together a detailed archaeological map of the area. "We saw a hole in the ground ... and went down and discovered this giant cavern, originally a quarry, built uniquely with hall after hall."

"Initially, the place was utilized as a quarry, which was active for 400-500 years. But the other findings definitely give the impression that the cave was used for other purposes, such as a monastery, and perhaps even a hideaway," said Zertal.

The site may eventually be turned into one of the largest underground tourist sites in the Holy Land.