Magna Carta is on display at Hereford cathedral 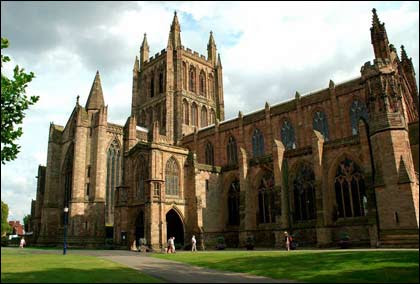 
One of the world’s most important documents has gone on show at Hereford Cathedral. Visitors can see an early copy of the Magna Carta in an exhibition which will run until August 31, which means it will be an added attraction for visitors to the city for the Three Choirs Festival.

Hereford’s Magna Carta is recognised as one of the best examples of the text, first agreed in 1215 and subject to several revisions. The copy, also called the Great Charter of Liberties, was issued by Henry III in 1217 and remains in superb condition.

Historians have taken a year to move the charter from the Chained Library to form the centrepiece of the display. The project was funded by the Association for the Promotion of Herefordshire and required the skill of international craftspeople. Work included gold tooling, mounting and the construction of a display case.

Liz Bowerman, of Herefordshire Archive Service, said it was exciting to work with other partners on the project. “I often work on later, lesser-known medieval documents but it is a huge privilege to work on something of the age and historical significance as Magna Carta,” she said. “It is in exceptionally good condition.”

Hereford Cathedral Archivist Rosalind Caird says their copy is one of the most significant early versions of this historic document: "Although most people will always link Magna Carta and King John with the date 1215, the charter agreed at Runnymede was only the beginning of the story. Magna Carta went through a number of revisions and reissues before being enshrined in English statute law in 1297. The most significant revision of Magna Carta was issued by Henry III in 1217, and Hereford Cathedral is fortunate to possess the finest surviving 1217 version."

The Hereford Magna Carta display opened on June 1 and is on show until August 31.