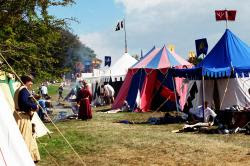 
Battle cries and canon fire will thunder from Herstmonceux Castle for its 17th medieval festival. The event, from August 29 to 31, honours 500 years since the accession of Henry VIII, last of the medieval monarchs, to the throne.

More than 1,000 re-enactors dressed in battle gear will take part in castle sieges. Jousting with knights on horseback is also planned – a favourite pasttime of Henry VIII. Mounted skill-at-arms competitions are also sure to woo crowds.

Clive Geisler, the festival's event director, said: "England's Medieval Festival has grown fantastically since its humble beginnings in 1992. The first festival was held over a couple of hours on a Sunday afternoon. We had half a dozen re-enactors involved in some skill at arms displays, and it proved to be quite popular with the public. When we repeated the exercise the next year, it proved to be even more popular and it just grew from there."

Authentic living history areas will let visitors enjoy the sights, sounds and tastes of medieval kitchens. Ancient crafts, such as the making of chain mail and boots, are likely to fascinate festival visitors. Wandering jesters, minstrels and dancers will entertain both young and old. Crowds will also get the chance to see ancient hunting skills with falcons and other birds of prey.