Olive Oil and Cathedrals, the Last Pope, and the Cat picture

A Dash Of Olive Oil May Preserve British Cathedral

Will this be the last Pope?


According to a report from Discovery.com, a 12th century prophecy suggests that the about-to-be-elected Pope will be the last one before the Last Judgment. Apparently, in 1139 an Irish archbishop named St. Malachy gave Pope Innocent II a list of who the next 112 Popes will be. This 112th Pope will be named Peter the Roman, and according to the prophecy will “feed his flock amid many tribulations, after which the City of the Seven Hills shall be utterly destroyed, and the awful Judge will judge the people.” The document containing the prophecy was found in the Vatican Archives in 1590, and many scholars believe it was actually created in the sixteenth century.

The Cat and the Manuscript 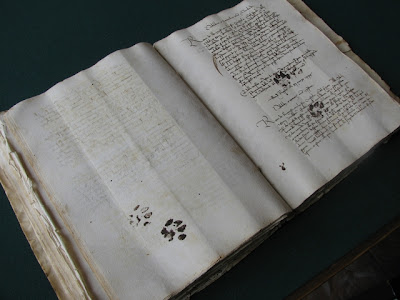 This great picture went viral last week - Emir O. Filipovic, a scholar working in the Dubrovnik State Archives in Croatia, found this when he opened up a manuscript. Apparently, a 15th-century cat must have got his paws into the ink, then onto this document. Emir took a photo of it, and later on tweeted to Erik Kwakkel and from there it went call over the world. Click here to read Emir's article about it.